An imaginary force masquerading as danger, fear can hold us back, hinder our dreams, and act as an invisible barrier to the things we want. When our boys were little, we loved to read What Was I Scared Of? By Dr. Seuss. The Seussian creature main character (what is he anyway?!) strolls in the woods one evening when he shockingly encounters a Pair of Pale Green Pants with Nobody Inside Them. Not given to fear, our hero tells us, he is understandably shaken up by this aberrant creature floating before him. Then the PGPWNIT move, “They kind of started jumping. And then my heart, I must admit, It kind of started thumping.” Still unafraid, our hero runs. Don’t judge. I don’t know about you, but if I met a pair of floating pants jumping up and down in a dark wood, I would run too! And it doesn’t end there. The pants nearly run him over while buying Grin-itch spinach in Gin-itch. Again, he encounters the pants on Roover River fishing for Doubt Trout. By now our hero is willing to admit he’s frightened—screaming and running away as fast as he can. Who can blame him? Are the PGPWNIT stalking him? Everywhere he turns the PGPWNIT show up. So, he hides. In a Brickel bush. For two days. The only reason he finally comes out of hiding—a nagging errand on his to do list. He has to “pick a peck of Snide in a dark and gloomy Snide-field.” We’ve all been there.

Picking snide, his body shaking, confronting his fears, he summons his courage,

I said, “I do not fear pants

With nobody inside them.”

I said, I said, and said, those words.

I said them. But I lied them.

And then it happens—he reaches into a snide bush and touches the pants!

I yelled for help.

I screamed, I shrieked.

I howled, I yowled. I cried,

“Oh save me from these pale green pants

In the midst of his shrieking terror, face to face with his greatest fear, he realizes the PGPWNIT are as afraid of him as he is of them! The pants are shaking and trembling as much as he is. Realizing the fear is in his head not the PGPWNIT, he decides to embrace them and they “become friends, meeting often, never shaking or trembling, but smiling and saying ‘Hi.’”

I love What Was I Scared Of? for the way it illustrates how we make up stories about people and our circumstances and let our minds get carried away—especially when we don’t understand something. I remember my big writing project from seventh grade, the Last Chance project. We had to write a story about our class taking a space ship to another planet and what we would do to create a new civilization. I did not understand the assignment. And it was huge for our grade. I spent a lot of time and energy avoiding the paper. It was my own PGPWNIT. Eventually, I sat down, read the assignment and start writing. We didn’t become fast friends that Last Chance project and I, but I did complete it and survived the experience.

I am continually learning to recognize when something scares me—especially something I need or want to do and to face it like those PGPWNIT. In my mid 30’s I decided I wanted to get a doctoral degree in theology. Despite my transition from ministry to business in the middle of the program, I saw it through, got through my dissertation and earned the degree. At 40 I realized I needed to exercise regularly to be there for my kids and Lisa. I joined a gym with a built-in accountability system of appointments to help me show up. I’m proud to say I’ve consistently worked out 4-5 times per week for four years. This past year I embraced my life-long love of music and started guitar and bass lessons. I’m not great, but I enjoy playing. Many times over the past decade in business, when things seemed scary, dark, uncertain, instead of shying away, I faced my deep fears and found a way forward. One of the scariest things I’ve done recently is to reach out to a group of guys I know in my gym class to grab a beer together. Men typically are not as good at getting together as our wives. And, I have faced the daily realities of raising a son with Cornelia de Lange Syndrome–his surgeries, his extra care, and the scares of nearly losing him to illness. 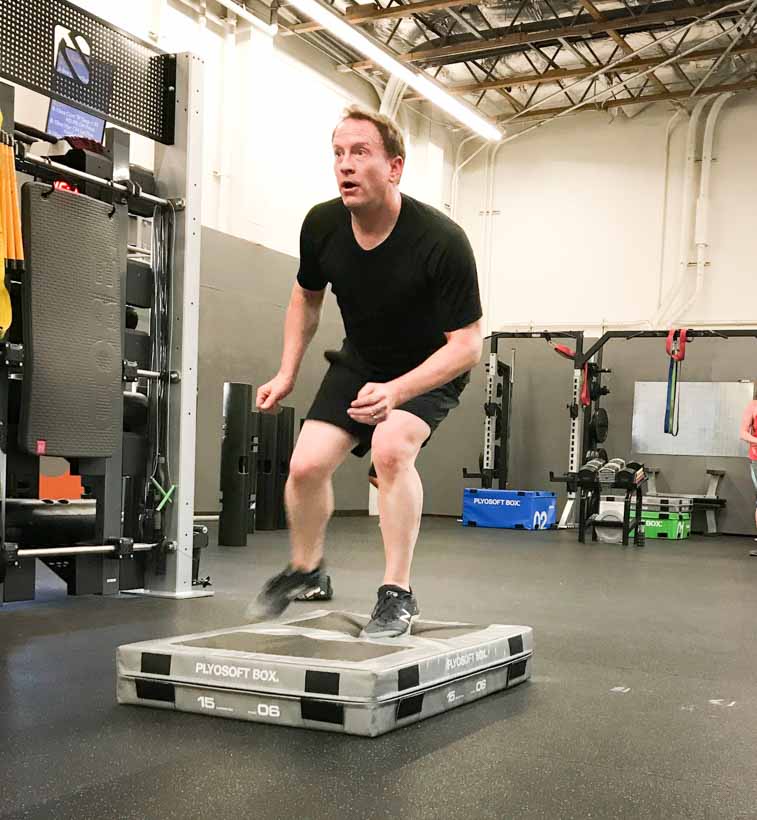 In each and every case, I looked my metaphorical PGPWNIT in the eyes and,

I said, “I do not fear pants

With nobody inside them.”

I said, I said, and said, those words.

I said them. But I lied them. 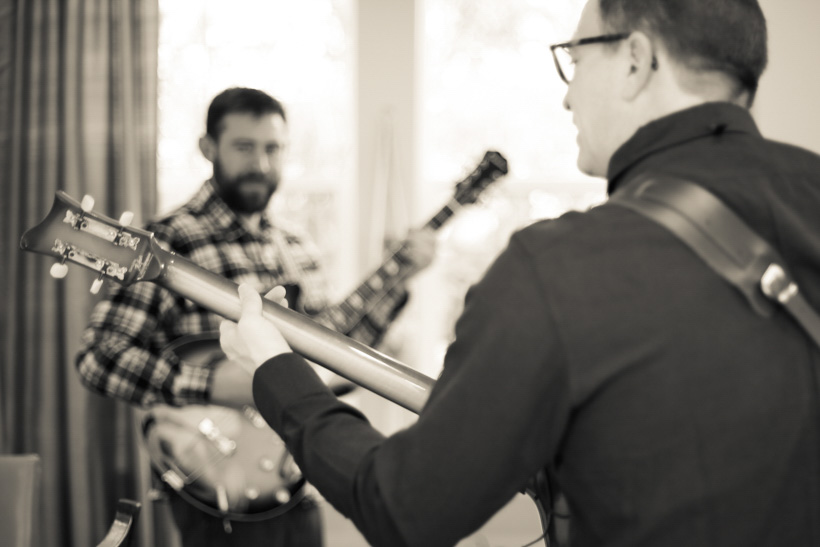 My heart thumping, screaming and shrieking inside, I went to the gym for the first time. I applied and interviewed for my doctoral program and finished my dissertation (It felt like my Last Chance paper all over again in my 30’s). Feeling like a fraud I showed up for my first guitar lesson. Feeling like I was high school boy asking a girl on a first date I asked the guys, “Hey, you guys think you’d ever be interested to grab a beer together?” They said yes! And, engulfed in fear, I have shown up for my family and my son to face the realities of Cornelia de Lange Syndrome. 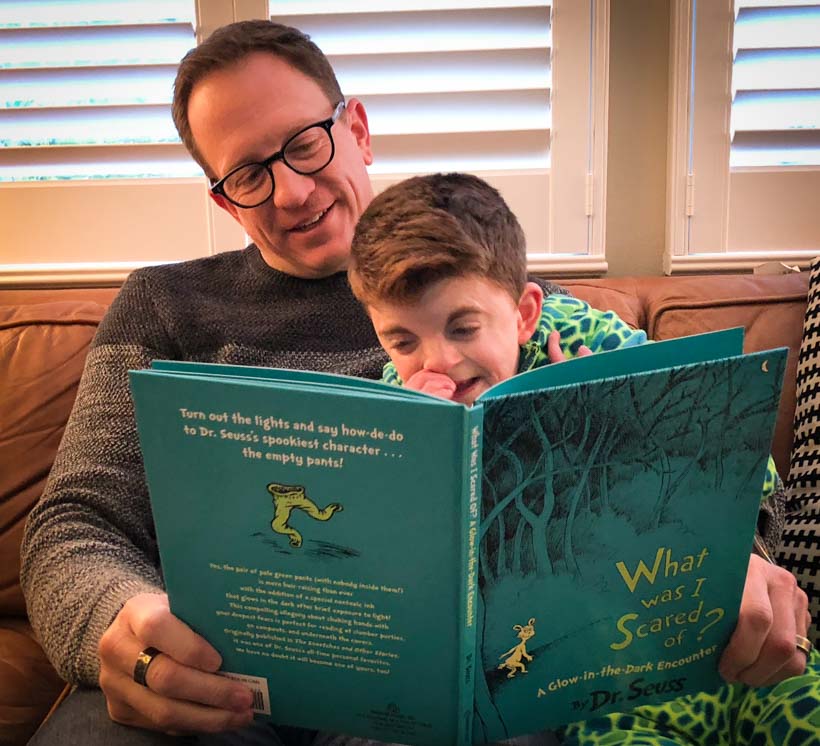 I don’t know what your PGPWNIT is. Maybe it’s a dream, a project at work, a hobby you want to take up, or even the fears around facing a chronic illness. You probably have your own PGPWNIT following you around your Grin-itch village where you live. Danger is real. Fear is in your head. The path to your greatest success is through your greatest fear. Turn and engage your fear. Take a step toward your dream. Start your hobby. Show up for yourself, or your loved one, facing illness.  After all, your PGPWNIT and you just might become friends, meeting often, never shaking or trembling, but simply smiling and saying hi.