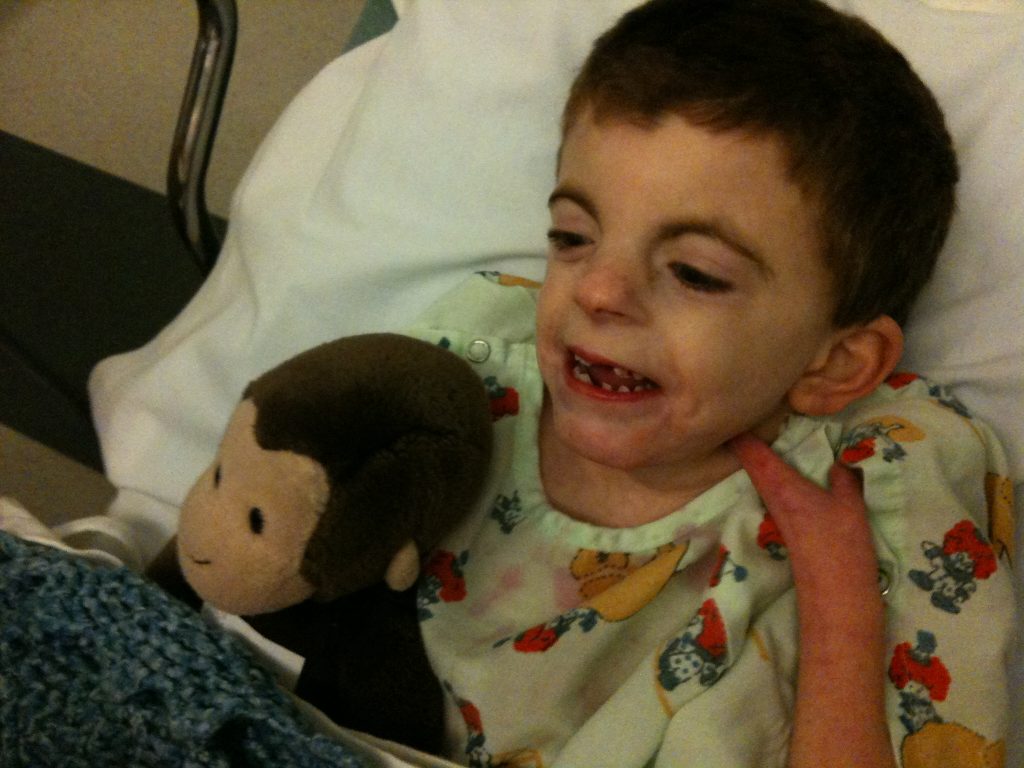 I was angry. Who in the world did this guy think this he was? Lisa and I were already three hours into our four hour journey to UCLA to meet with David’s heart surgeon about his upcoming surgery. Our boys, David and Matthias, were in the back seat of the car and we were well into the trip when the office called. The woman on the phone informed Lisa the surgeon cancelled our appointment as he didn’t come into the office today. Really? Who schedules a pre-operation appointment and then waits to cancel with the patient at noon on the day of the appointment? David was going in for open heart surgery to repair a cushion defect and defective valve—one of his medical conditions resulting from Cornelia de Lange Syndrome. You could say we were a little anxious. I decided then and there I was going to give this surgeon a piece of my mind when we saw him the following week at the newly made appointment time.

The following week we again loaded up the car for the four hour journey from our home down to UCLA. This time, we called the office multiple times to verify the appointment before we got on the road. A week had passed since the enraging phone call, so I had to remind myself how mad I was at this surgeon. I had never met him before, but after his shenanigans the week before, I questioned whether this guy was responsible enough to handle my son’s heart surgery. After all, if he can’t keep his schedule straight, how can he be any good as a surgeon? 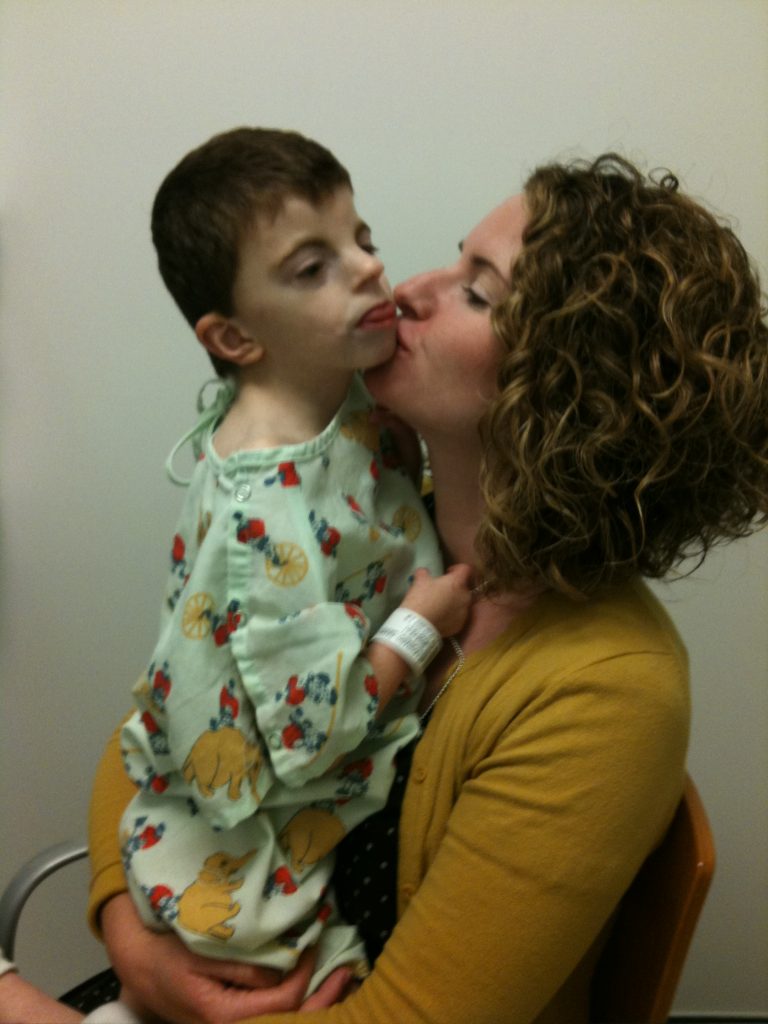 We waited in the office and finally were taken back into the consult rooms. A nurse came in and took David’s height, weight and blood pressure. Then we waited. I didn’t feel angry anymore about the cancellation a week earlier, so I had to work to be ready to confront the surgeon when the time came for me to voice my irritation over his lack of consideration and potential lack of competence. It’s hard to be angry when you’re in a reasonably good mood, so I had work at it a bit. At least I was stressed by the very nature of the visit, so that gave me a little negativity to draw on.

The moment of truth arrived. The surgeon knocked and entered the room. They say you never have a second chance at a first impression. In his case, my first impression has lasted in my mind for many years. As he stepped into the room I noticed his scrubs—not uncommon for surgeons to wear around the hospital between surgeries. But my eyes were immediately drawn to his white tennis shoes—out of date, funky soles, neither utilitarian nor stylish. They are the type of shoe hipsters began wearing ironically a few years later—which did not make them hip at the time. Then my eyes were drawn to his mussed, bouffant hairstyle. Truthfully he had probably come from surgery, having removed his surgical cap his hair showing the signs of a morning spent saving another child’s life. Of course, that wasn’t the narrative in my head when I saw Dr. Cardio Surgeon. To me, his hair and his shoes were further signs this was not the guy to handle my son’s heart.

And then there was his awkward manner. As he entered, he looked like a junior high actor unsure of how to move across the stage, unsure of what to do with his hands while people watched him. Each step was functional with a touch of conscious effort to get him from the doorway to the chair where he eventually sat down. I continued to build my case against him. He had offended me and was showing clear signs of incompetence in my mind. 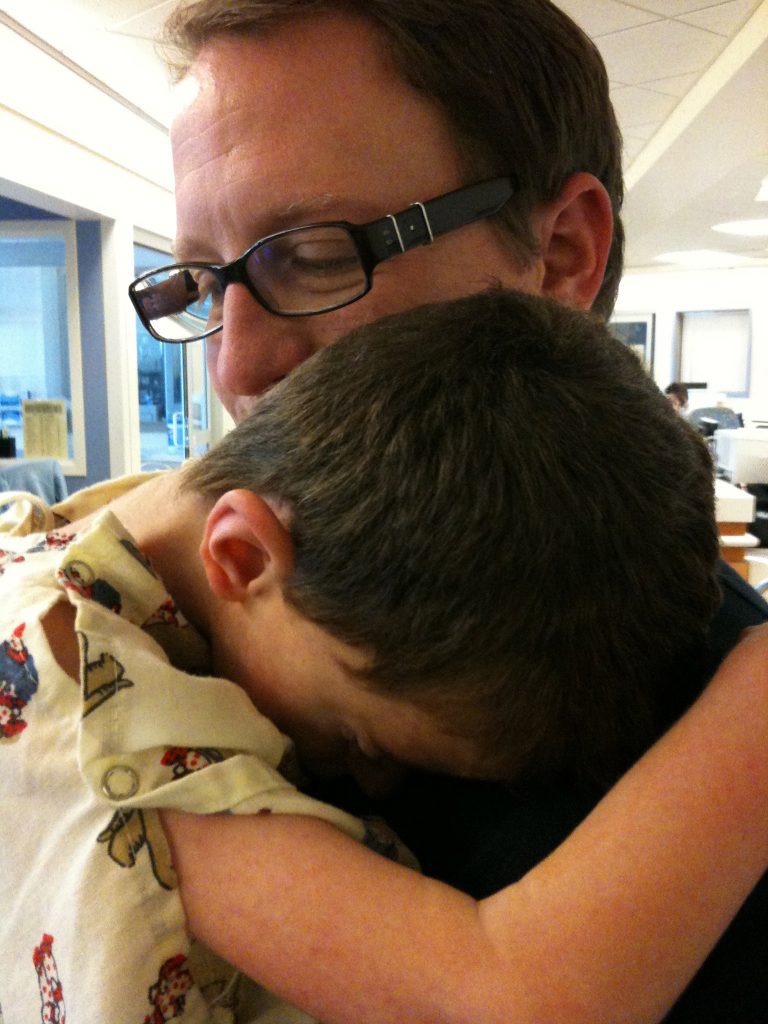 He introduced himself and performed a rote reviewed of David’s case. He transitioned without so much as a breath into the procedure. With technical jargon I can no longer remember, he described how he would make a cut down the front of David’s chest and divide the breastbone to reach the heart. They would connect him to a heart-lung machine to pump his blood and act as his lungs during the surgery so he could remove David’s heart. He would need to enter the heart and patch the ventricular septal defect (holes in the wall of David’s heart). Then he would put everything back together and close him up. Imagine if Mr. Spock (the original Leonard Nimoy Spock, not Zachary Quinto’s Spock) explained precisely how he was going to open up your seven year old’s chest and repair his heart and you may have some idea what it was like, though Dr. Cario Surgeon lacked Spock’s human touch.

Then he asked if we had any questions. We asked a number of clarifying questions—mostly “Are you really hooking David up to machines to breathe and circulate his blood while you remove his heart?!” in different forms. We asked him how difficult this surgery was for him. He rated it a two out of ten. To us it felt like an eleven. In the midst of this meeting, I realized it would be no use to point out Dr. Cardio Surgeon’s offense at cancelling our appointment last minute. Like Darth Vader, he was “more machine now than man.” I am confident he would have listened and heard my complaint. I am confident the human subtleties of slight would not have computed for him.

A few weeks later, it was time for Halloween and David’s surgery. We spent the anxious hours of the surgery distracting ourselves around the UCLA campus from the stressful reality of David lying in an operating room with chest opened. When he finished the surgery and came to give us his post-op report, we were so elated and relieved the surgery was successful, Lisa couldn’t help but reach out and touch his arm in gratitude. He looked down at her hand and then up at her. He didn’t move other than slowly connecting the hand on his shoulder to its owner. His face didn’t change, he barely moved a muscle, but he simultaneously looked surprised by the contact and like he understood this is a positive gesture. We spent more time with Dr. Cardio Surgeon over the next couple weeks as David recovered in the hospital. Without fail, every other time we saw him, Dr. Cardio Surgeon had at least two other doctors with him. Often they did more talking than he did. He seemed to prefer to do rounds when people were less likely to be around.

Along the way, Lisa’s sister researched Dr. Cardio Surgeon and found he is among the best pediatric cardio thoracic surgeons in the world. He is a world class expert with world class skill. I could have made a big deal and even insisted on another surgeon to operate on our beloved David. Ultimately, who would I rather have open my son’s chest and handle his heart? Someone who’s polite, has his schedule dialed in and wears nice clothes? No way. I’ll take Dr. Cardio Surgeon every time. 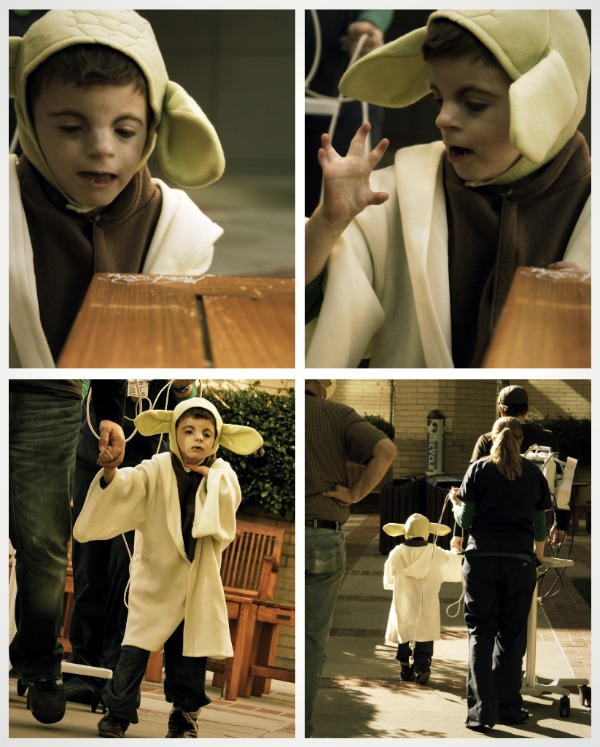 We have faced a lot of things since this surgery. Our boys have been sick. Our business had a drastic downturn and we almost closed it down. We’ve experienced intense, rocky relationships with vendors and business associates. Our marriage came close to imploding. And more. Very little of any of these stresses compares with the stress of this experience, knowing someone holds your child’s heart in their hands. Watching David’s surgery, his determination and resilience in recovering, puts many things in life into perspective. And there is no one I would rather have holding David’s heart than Dr. Cardio Surgeon. It goes to show, while you may only have one chance to make a first impression, first impressions are often wrong. Who else have I misjudged? The barista I thought slighted me, who was simply coping with her breakup the night before? The quiet employee I overlooked because I failed to see her consistent and great work? The friend I falsely believed didn’t want to listen to my struggles? Sometimes the person we see as our enemy turns out to be our ally and the best person for the job.