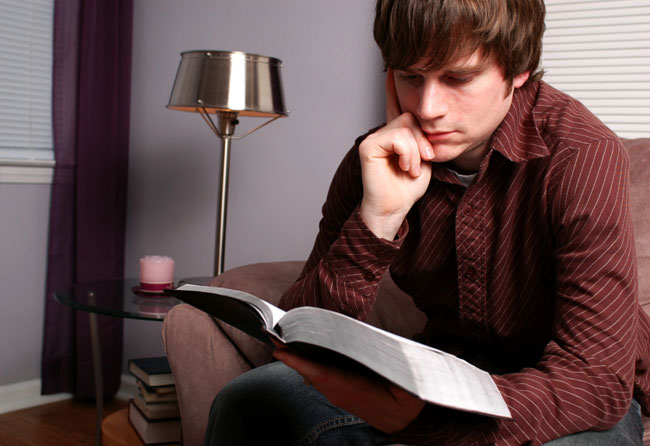 “What do you do with some of the strange things the Bible says?” Greg asked.

A bunch of us guys were together for guys night. We had just finished giving the waitress our order.

“Do you always start conversations like this?” I asked. “Like, are you serious, or are you joking?”

“I’m serious. I have a lot of friends who object to Christianity because some parts talk about loving people and then there’s a bunch of parts—especially in the Old Testament—where the Israelites kill a bunch of people, or there’s the guy who sacrifices his daughter, and weird things like that. It seems like there’s a lot of contradictions in the Bible. Bible heroes do really bad things sometimes and it’s right there in the Bible, you know? What do we do with that?” Greg answered.

Just today I was reading in Genesis 34 where Jacob’s daughter Dinah is raped by a Canaanite named Shechem. (Seriously, that’s his name.) Naturally, Shechem does this horrible deed because “his soul was drawn to Dinah the daughter of Jacob. He loved the young woman and spoke tenderly to her.” (Genesis 34:3) Since he loved her so much, after raping her, he asked his dad Hamor to get Jacob to agree for them to be married.

So far, so bad. Still, Jacob’s sons hear about and are furious that their sister was humiliated and treated like this. It’s wrong. They want justice for their sister “because he had done an outrageous thing in Israel by lying with Jacob’s daughter, for such a thing must not be done.” (Genesis 34:7)

Apparently it was done in Canaan because the next thing you know, Hamor asks Jacob and his sons for Dinah’s hand in marriage to Shechem. Dinah’s brothers agree—with one tiny little caveat—every male among Hamor’s people must be circumcised. (No irony here of course.) I don’t know what you would do in Shechem’s shoes, but he “did not delay to do the thing” because, well, he was in love! (Genesis 34:19)

It doesn’t end there. “On the third day, when they were sore, two of the sons of Jacob, Simeon and Levi, Dinah’s brothers” broke into the city and killed every male, plundered the city, their flocks and “All their wealth, all their little ones and their wives, all that was in the houses, they captured and plundered.” (Genesis 34:30)

Simeon and Levi stand up for their sister. But, did they act any better than Shechem? Jacob tells them off them for what they did, but only because he’s afraid of Hamor’s allies. He sounds like he planned to go ahead with the marriage. Is this how Bible heroes act?

What about God—what does he do about this mess? In the next chapter God tells Jacob to leave that place and He protects Jacob as they travel. It’s easy to feel this is less than we want from God in this situation. So why is all this in the Bible? It doesn’t sound very…biblical.

This is one of those passages that’s starts with a mess and deteriorates from there.

Where’s the godly hero who we should emulate? Is the moral that we should take matters into our hands when wronged? Are we supposed to execute vigilante justice and God will look the other way? Maybe there are some lessons about dating and why courtship is the biblical way to prepare for marriage? (Obviously Shechem took Dinah on an unsupervised date and, well, you know the rest.) Maybe it’s a moral about what not to do? Don’t take your beautiful daughter and angry sons anywhere, and don’t introduce them to anyone, otherwise bad things might happen.

But the Bible is an epic story, not a series of moral tales. It’s Lord of the Rings, not Aesop’s Fables. Trying to make sense of this passage on it’s own is like asking why Frodo doesn’t just melt down the ring at the beginning of the third movie. Every scene has to be read in light of the greater story. Genesis 34 is a moment when everything the hero is attempting is put in jeopardy. And the hero of the Bible is not Jacob, or Simeon, or Levi, or Dinah.

The hero of the bible is God.

The story so far is that God created an amazing world. Humans loved the world he made, but weren’t so keen on God. Since taking matter into their own hands, lots of people have killed each other and the world has become a hostile place. But God promised to fix the world we broke and to save us from ourselves. And He promised to do it through Eve’s son. By Jacob’s time we’re many generations removed from that promise. If you were reading a novel instead of the Bible, you’d be thinking, “This family line stinks. Where’s the son that’s going to defeat the bad guy?”

It’s not until further on in Genesis 35 that we get a sense of what God is doing. After protecting Jacob by moving him out of harm’s way, God reminds Jacob of his promises,  “I am God Almighty: be fruitful and multiply. A nation and a company of nations shall come from you, and kings shall come from your own body. ” (Genesis 35:11) God gives a hint of what’s ahead. This is a reminder. God is still in charge. He hasn’t forgotten his promises. One day he will put a king on the throne. When the story unfolds, we learn that king is Jesus. Jesus’ kingly act is to die for our sins the way Hamor and Shechem died for theirs.

Genesis 34 is a dark chapter in the story. But it’s a true story. True because this is the kind of world we live in. It’s a world where rape, murder, genocide, theft and the worst of humanity can thrive at times. It’s a world that needs a hero. This promise of a king is a reminder that God is that hero. And he’s on an epic quest to redeem his world from sin and to restore us to the life he always intended.

How do you deal with the hard stuff of the bible?

During a recent trip I chatted with a friend about what it looks like to be a righteous man. He had searched the Bible for a description of righteousness and found a useful list where Titus outlines qualities of Christian leaders, “He must not be arrogant or quick-tempered or a drunkard or violent or greedy for gain, but hospitable, a lover of good, self-controlled, upright, holy, and disciplined.” (Titus 1:7-8) It’s a helpful list of attitudes and actions to avoid and to adopt.

A righteous man or woman should also increasingly live out the positive qualities on this list:

But Titus’s list won’t make us righteous men or women. This list describes one who has trusted in The Righteous Man, Jesus. Righteousness begins with Jesus and not with us.

“But when the goodness and loving kindness of God our Savior appeared, he saved us, not because of works done by us in righteousness, but according to his own mercy, by the washing of regeneration and renewal of the Holy Spirit, whom he poured out on us richly through Jesus Christ our Savior, so that being justified by his grace we might become heirs according to the hope of eternal life.” (Titus 3:4-7)

The phrase “being justified by his grace” means “made righteous” by his grace! Titus’s list about righteousness assumes our trust in The Righteous Man and his mercy!

In what ways do you struggle to trust in The Righteous Man rather than your own righteousness?