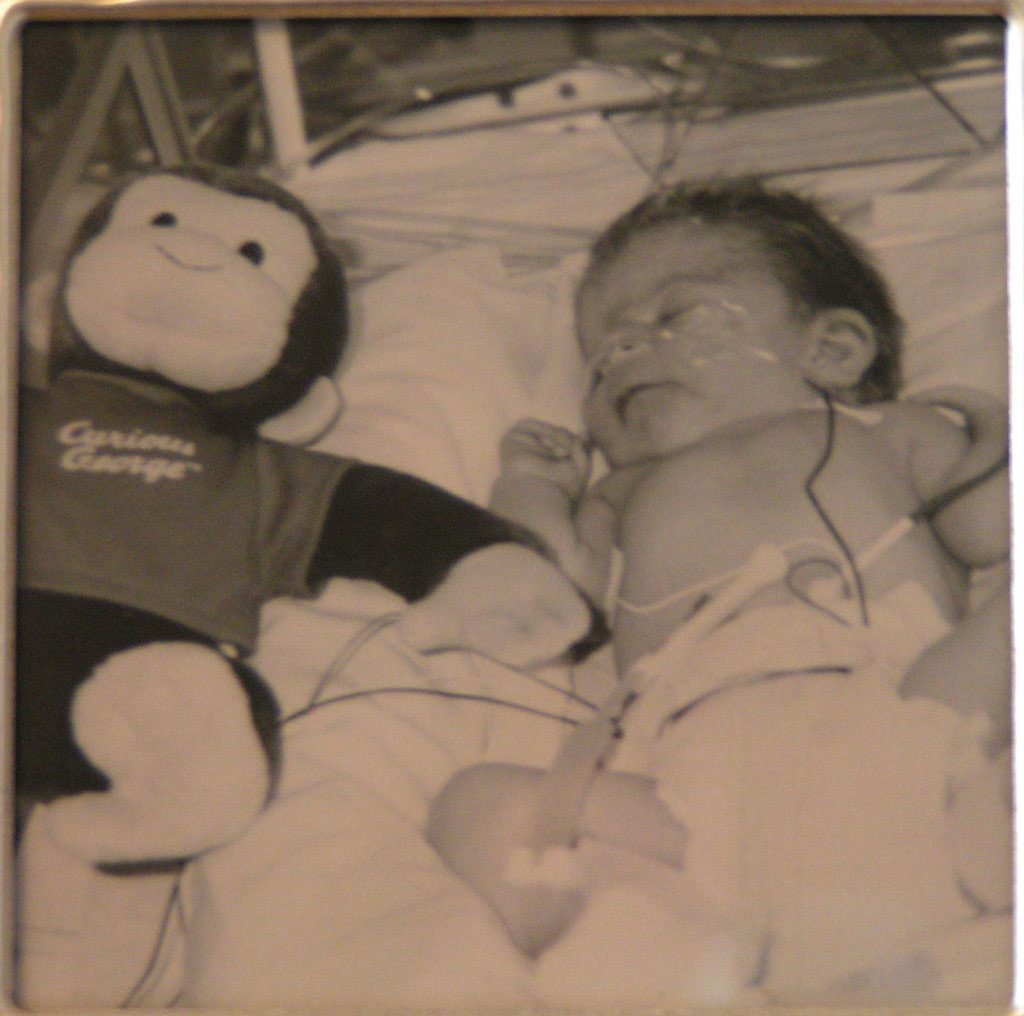 July 4th 2002 was one of the best and darkest days of my life. After months of eager anticipation, days of anxiety and hours of fear, Lisa and I welcomed our son David into the world.

Lisa went in for her 36 week pregnancy check up (I almost didn’t go as they had become so routine) and the doctor told us she was measuring small–for 31 weeks! Thus began the whirlwind.

Over the next couple days we sought answers, saw more doctors, were told his small size “could mean anything” by the ultrasound doc at the hospital. I asked what she meant. Her reply? “It could be nothing. He could have a genetic disorder. It could be fatal.” Confusion and panic set in as we checked Lisa into the hospital to induce labor and play the waiting game.

In these anxious hours dear friends began to encourage us that it would all be OK. People tried to cheer us up and take our minds off of things. “I have a feeling it’ll turn out alright.” “Don’t worry, we had a scare with our first pregnancy too.” “Doctors make a big deal out things. I’m sure it will be fine.” To this day I am thankful for those people who were in the thick of it with us. Some of their words gave us false hope and even hurt for a time afterward. But, Lisa and I felt loved by our church family and close friends. They sat with us on the phone and brought Lisa El Burrito Jr. in the hospital when she wasn’t supposed to get it.

I remember cheering Lisa on as she endured labor. Both of us afraid of what lay ahead.

“Push baby! We’re going to meet our son!” I called out to her while wondering inside if our baby would come out dead or alive.

Finally, on the afternoon of that 4th of July (Lisa favorite holiday coincidentally), little David burst forth at a whopping 4lbs 2 oz., seven fingers, ten toes notably missing the crying sounds we had heard from down the hall every few hours as new lives emerged into the world.

24 hours later we learned David’s diagnosis. Cornelia de Lange Syndrome. We had shuffled quickly back to Lisa’s room leaving our son in the N.I.C.U. while we poured out our hearts in grief, when a knock came on the door. For some unknown reason I opened the door to find Rick, one of our church elders, standing there. I didn’t know what to say, but he quickly realized he happened upon us at a bad moment and excused himself.

As I began to shut the door I realized I needed to share our awful news with someone and chased after him down the hospital hallway. “Hey Rick. They just told us a couple minutes ago that David has a genetic disorder called Cornelia de Lange Syndrome.” And the next moment is burned into my memory. Rick’s face dropped. He staggered backward until his body found the wall behind him. He looked me in the eyes, compassion on his face and said “That sucks. Steve I’m so sorry.”

Now, I know you’re not supposed to say “sucks.” I know stories like this are supposed to have some moment of profound wisdom and a turning point where everything turns out alright in the end. But this is real life. Those words have been a balm to my soul from that day until this one. Rick’s words gave me freedom to see that Cornelia de Lange Syndrome ought not to be in the world. It’s a sign that something is gravely and pervasively wrong in the world. Rick gave me freedom to hurt and weep and and question God and eventually to pick up the pieces again and move forward.

I’ve walked through many hard moments with a great number of people since those days. I’ve sat at bedsides of dying and dead loved ones as a pastor. I’ve cried with friends enduring divorce. I’ve been in the hospital with people in crisis and more. I can’t remember all my words today. I know my own temptation toward platitudes. I know my instinct to try and make it OK. Still, the best words anyone has ever said to me came at the darkest moment. “That sucks.” Best. Words. Ever.

What words has someone shared with you that spoke to your heart in a time of hurt or crisis?

Actually, I apologize a lot. Chances are, if you’ve an email from me it began with something like, “I apologize it’s taken me so long to get back to you…” That’s because I’m a horrible friend and am terrible at getting back to people. (Maybe now is a good time to apologize to you if you are waiting to hear back from me as I write this.) To make matters worse, my wife Lisa told me recently that I’m not the nice guy I walk around thinking I am. Nope. I’m an expletive that rhymes with “gas bowl” and looks like the tail end of a burro. Don’t get the wrong idea–I asked for it. We were driving on a road trip (I don’t know about you, but our best conversations happen when we sit in the car next to each other for hours on end) and I was asking my dear wife for feedback about myself. Somewhere along the line I helpfully offered what a nice guy I am and how I let myself get pushed around. Her response? “I don’t know that I’d say you’re a ‘nice guy.’ You can be nice. You’re a good dad and I love you, but you’re kind of an…” well, you get the idea.

My self-absorbed burro like personality means I have plenty of opportunity to practice apologizing to people for a variety of reasons. It also means I listen to the apologies of others. I’m a bit of an apology connoisseur as it were. Here’s what I’ve noticed. When I say “I’m sorry” for something I’ve done, I almost never am. In fact, in our house “I’m sorry” almost means, “I’m sorry you brought up my ‘supposed offense’ now leave me alone!” (I actually did this to Lisa the other day when she called me on the carpet for a rude comment) And, I don’t think we’re the only ones who “apologize” in this way. I’ve heard it in the so-called apologies of friends, acquaintances and strangers. I’ve heard it among family members and co-workers. “I’m sorry” are two words we use as a society to quickly get people off our backs and to avoid the pain of responsibility and reconciliation.

What to do? I have found a profound difference between saying “I’m sorry” and speaking the words “I apologize.” (PLEASE tell me you never utter phrases like “I’m sorry you feel that way.” worst. apology. EVER.) Uttering the five-syllable, two-word phrase “I apologize” cuts through any attempt save face and helps us admit we are just plain wrong. For advanced users, I recommend adding what you apologize for–and be specific. It’s surprising how simple and difficult the switch can be in real life. It’s also surprising what a difference it makes to our relationships. Take it from one who has had plenty of opportunity to practice, next time conflict arises, see what happens by simply saying, “I apologize.”

How did it go last time you had to say “I apologize”?