I have a friend whose grandfather served in WWII. He’s an amazing guy. My friend stayed with my cousins in England during a semester abroad and learned the Air Force base where he was stationed was only a few miles up to road. They took her there and showed her around. During one of their visits to America, I got to have dinner with Grandpa. Listening to him tell his stories I was blown away by this Guy. He was a B-17 pilot shot down on his 24th mission (you might recall the Memphis Belle is famous for being the first to complete 25 missions), when he told his crew to abandon over occupied France. 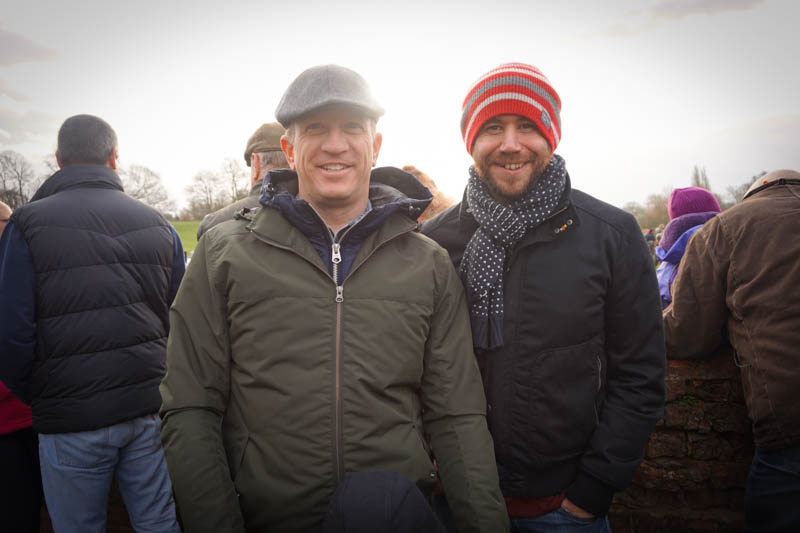 Me and My Cousin Lee on Boxing Day

I asked him how he was able to make the decision to bail out of a plane with three of four engines working. He was a 22 year old guy at the time charged with the lives of 14 men. “There was no decision to make. I saw other planes go up in flames with less damage than ours. I saw were in trouble and did what we had to do.” As a 22 year old at the time myself, I was astounded.

After he jumped, he landed in occupied France and was picked up by the French resistance. Eventually he was captured by the Germans as POW and placed in Stalag Luft III in Sagan (now Żagań, Poland) of The Great Escape fame. While he was not a part of the Great Escape, he was there with the guys when it happened. To top it off, when the war ended American tanks rolled into Stalag Luft III to liberate the POWs and who popped out of the top of the tank but General Patton! By the time Grandpa turned 25, he had endured life and death decisions, imprisonment, and the help of some of the most famous people in the War.

I read Psalm 46 this morning where the psalmist declares his gratitude for God’s presence in the midst of trouble, “God is our refuge and strength, a very present help in trouble. Therefore we will not fear though the earth gives way, though the mountains be moved into the heart of the sea, though its waters roar and foam, though the mountains tremble at its swelling.” (Ps 46:1-3) For the psalmist, as for Grandpa, the difficulties of life are from outside threats. Drought induced famine threatening his ability to eat. Enemies who want to take over his city and kill him.

I’m tempted when I hear stories like Grandpa’s or read texts like Psalm 46 to think how easy my life is in comparison. In real ways this is true. I am not a soldier in war. My problems with food result from its abundance not its scarcity. No enemy force is plotting how to conquer San Luis Obispo, CA.

Still, I find courage in my life from hearing about Grandpa’s service in the War. I am heartened by knowing God is ever present in times of crisis. External trouble is easy to see. Internal conflict is just as real. I have fought battles and wars against depression and doubt about my worthiness. I have been imprisoned by false stories of shame, inadequacy and rejection. I have endured times in my marriage when Lisa and I both wonder if we can keep going anymore. I have questioned my calling and career path often. I have felt alone.

But I know I am not alone. I know men and women struggle with these same internal struggles everyday. Men, anxious about if they are strong enough, brave enough, successful enough enough to be loved and respected. Women, feeling guilt about whether they are pretty enough, love their kids enough, do enough for those around them. People who feel alone, secretly believing no one feels fear, hurt, and anxiety like they do. Women sometimes share their struggles. Men often believe we have to keep our hurts, fears and anxieties secret for fear we will appear weak.

We live in a world where being human everyday is hard. Many of our lives our are like 22 year old Grandpa–flying in the plane of our lives, one engines out and in trouble. The only option is to see it and take action. The great lie is we are left to face these difficulties alone. We think if anyone knew the truth, we would be attacked, ostracized or ditched.

But we are not alone. We have each other. Shame researcher Brené Brown, in interviewing hundreds of people, has found the most courageous thing we can do is find someone we can trust and be vulnerable with them. Whoever you think has it all together has as much going on in their life as you do in yours. No one needs to share everything with everyone, but we all need a couple confidants with whom we can be terrifyingly honest.

We are not alone. God is present. The psalmist calls him his “refuge and strength, a very present help in trouble.” In The Lord of the Rings, the Elf Queen Galadriel gives the little hobbit Frodo a gift in his quest that is too large for him. “And for you, Frodo Baggins, I give you the light of Earendil our most beloved star. May it be a light to you in dark places when all other lights go out.” The light of Earendil is imaginary in a story. I have found time and again God’s presence to be a true light when all others go out.

Grandpa survived his plane getting shot down, capture and imprisonment during WWII. At every step he was not alone. He had his crew, a French stranger to guide him, fellow POWs and his God. We are not alone. We have our confidants, temporary guides like coaches and therapists, our fellow travelers in life suffering alongside us and our God.

What challenges are you facing?