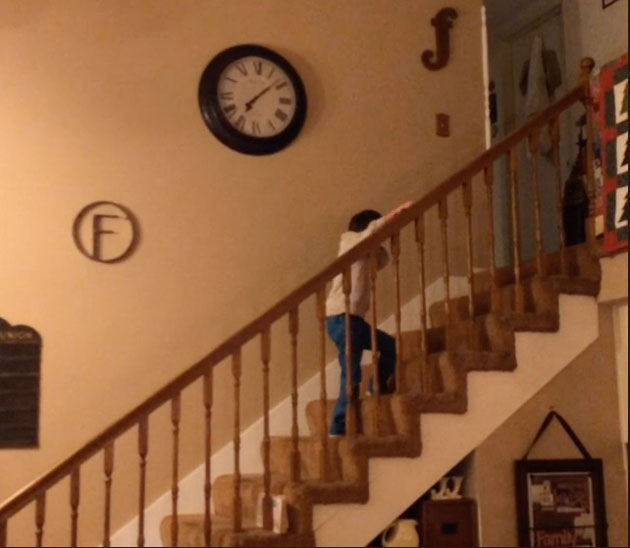 Over Christmas David sprained his foot. He was crying and it took us a few minutes to figure oru the real problem. Just that night he had been climbing the stairs at his grandparent’s house during a family gathering. When your child has special needs (David has Cornelia de Lange Syndrome), you notice when they suddenly ascend the stairs. On their own. Five times.

We celebrated of course. Then, one barely noticeable slip on the last step, while holding his auntie’s hand and he was in tears.

We know David’s cry for pain pretty well. One of my nightly dad-rituals is to put the boys to bed. I enjoy spending the last few minutes of the day with the kids—reading, talking with Matthias about life, a moment to tell them I love them and am proud of them (something I think dads should tell their kids regularly and often). After I put the boys to bed, I often sit with David, patting his tummy when he has major reflux and gas pain. He has a distinct “My tummy hurts and I don’t know what to do” cry. I know his cry that comes from pain.

Once we saw swelling on his foot, we took him to the ER just to be on the safe side. David can’t talk, so knowing what he’s feeling can be a challenge at times. We weren’t sure whether it was a sprain or a break, so off we went, middle of the night, for X-rays.

That was the night I learned about the FLACC Pain Scale.  Here’s the official explanation:

The Face, Legs, Activity, Cry, Consolability scale or FLACC scale is a measurement used to assess pain for children between the ages of 2 months and 7 years or individuals that are unable to communicate their pain. The scale is scored in a range of 0–10 with 0 representing no pain. The scale has five criteria, which are each assigned a score of 0, 1 or 2.

I don’t know why we hadn’t heard of this in 11 years of caring for David, but there is was on the wall of David’s room in the ER. Being bored, I read. I took in what it said.

“Lisa, check this out. I just read this pain scale for kids who can’t talk. Listen to this and see if it

“Yea, David clenches up his face like that a lot.” Lisa said.

“It does.” Lisa answered.

“OK, check this out, ‘Activity—Arched, rigid or jerking.” I read.

“Whoa. They have arching on there?” Lisa said.

“I know. And listen to this. Cry, Crying steadily, screams or sobs.’ And ‘Consolability—Difficult to console or comfort.’ That’s totally David.” I said.

“That’s ten out of ten on this scale.” I told her.

It’s one thing to experience your child’s pain. It’s another to read an objective scale that uses the same words you’ve used a thousand times to describe your child’s pain. Drawing up his legs, arched and rigid, screaming and sobbing. These are our words, spoken inside our home. There they were on the chart.

But you also have to understand. This is just the way it is for us. We don’t think about it. Honestly there’s times we feel annoyed instead of compassionate. I’m not trying to sound like a monster, I just want to be clear that we’re not saints either. It’s real life.

What I do think about when David is sobbing in my arms during our post-put-the-kids-in-bed ritual is our relationship as father and son. I hold him tight (he’s STRONG for being so little!) to help him regain control of himself and I pat his tummy. Sometimes, he’ll grab my hand and motion for me to do it. After medication, time, and pats, he calms down again.

The last thing I do is wipe the tears from his eyes.

One of the most beautiful verses in the Bible points the kind of Father God is. Becoming a dad and understanding David’s pain has put the verse into living color for me. The Bible says, “He will wipe away every tear from their eyes, and death shall be no more, neither shall there be mourning, nor crying, nor pain anymore, for the former things have passed away.” (Revelation 21:4)

This is the world we live in. Today there is pain. Not just for David, but for me and for you, those we love, and those we don’t even know. I don’t always understand the pain. Sometimes it seems like God doesn’t notice and isn’t doing anything about it. Then we read that God’s story—and thus the story of the world—will include a day where there’s no “mourning, nor crying, nor pain anymore, for the former things have passed away.” And God wipes the tears from our eyes.  That’s what God is doing. That’s the true story of the world. That’s who God is.

The last thing He will do is wipe the tears from our eyes.