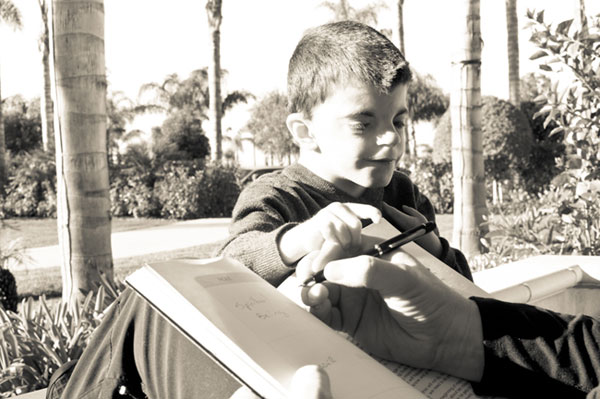 I don’t want to miss out on the important stuff. Because life is busy, I set goals and review my priorities regularly.

I sat down the other day to review my goals for the year. I’ve been convicted recently that I need to grow in the ways I show love to the people in my life. I was thinking and praying and writing. Right at the moment I started getting into it, David walked up, reached out his right hand and rested it on my hand as he looked off into the distance. This is David’s way of asking to be picked up and held. I was busy, so I said hi to him, told him I couldn’t pick him up right now, removed his hand and continued working.

A couple of minutes went by. David came back and again placed his hand on mine—interrupting my writing this time. Again, I acknowledged him and sent him away.

A few minutes later the same thing happened again. David, standing in front of me. Hand on my hand, keeping me from writing down my thoughts and goals about living out a life that shows love better. I was annoyed.

That morning, I was focused on what I was doing. David was interrupting me. I was trying to get things done. I was working on something important. I didn’t have time to pick David up. I need time to focus so I could live the life God has called me to live.

Meanwhile, David kept coming back asking for attention. I told I love him. I told I saw him. But really I just wanted to get back to what I was working on and focus on my work again.

David persisted. And as I thought about my goals as a father, I thought about how one of my goals is for my children to know that I love them—that they are important to me. I want to spend time with them. And I began to think about the day I may not be able to hold him. I may not be able to hug him. So, I stopped. I stopped trying to figure out what my life is about and decided to live into the life I have. I stopped writing what I want to be and decided to be that person. At least in that one moment. I picked him up and held him. Nothing important got done. But we did the most important thing.

When have you almost missed the most important thing?

8 thoughts on “Getting Done What Matters Most”